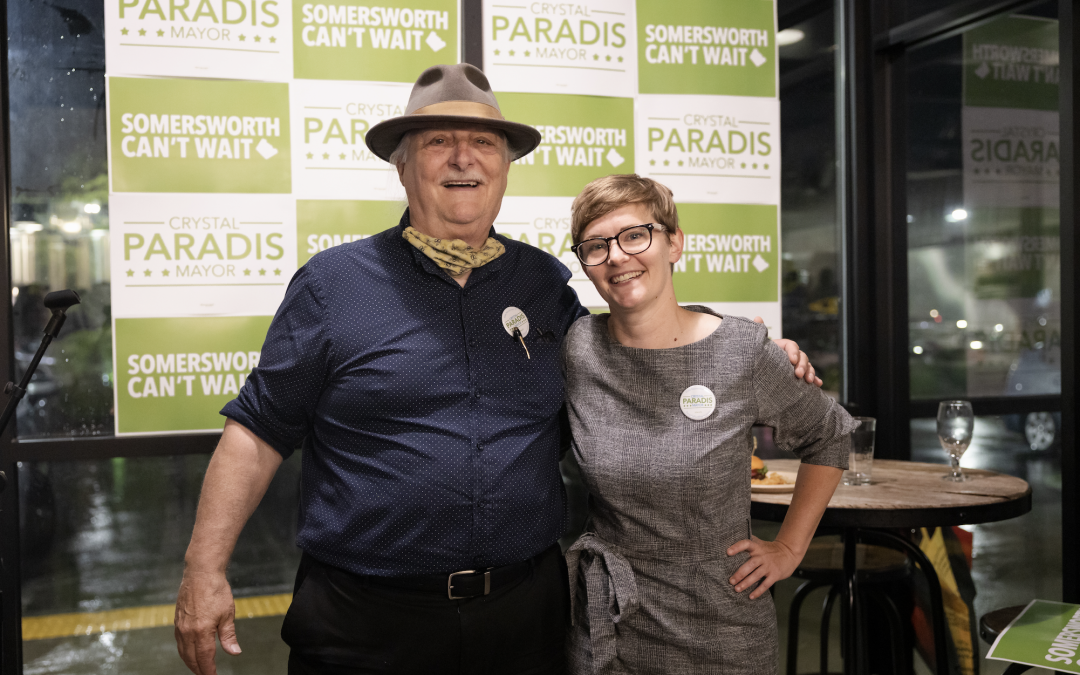 “I’m incredibly honored to be endorsed by Lincoln Soldati, one of Somersworth’s most beloved mayors,” Paradis said. “Lincoln’s work as Strafford County Attorney transformed how we handle sexual assault cases: a trauma-informed approach that prioritizes the safety and wellbeing of survivors which became the statewide model. Lincoln’s legacy in Somersworth and Strafford County inspires us to see that our communities don’t have to settle for the status quo—we can work to find solutions together that can better the lives of Hilltoppers. Thank you, Lincoln, for your years of leadership and dedication to Somersworth. I look forward to carrying on this work.”

“For nearly 30 years, my wife Kathleen and I lived in Somersworth, across from the City’s namesake, the former Hilltop Elementary School our four children attended and the high school my own father and his siblings attended, starring on the football field. Somersworth wasn’t just a home for my grandparents, parents, and our own family, it was where we developed a deep appreciation for the meaning of neighborhood and community, and where we were actively engaged in building that community.

“During much of the time I lived in Somersworth, I was serving as Strafford County Attorney (18 years), and I became active in the City, serving eight years on the School Board including as Chair, overseeing the renovations of the Middle School and High School. In 2009, I was elected Mayor. In these City positions, I worked to make a difference in the lives of Somersworth residents, strived to set an example for respectful public discourse, and open the doors of City Government.

“Under my leadership, I established the first Sustainability Committee, dedicated Somersworth to being a Local Economy Community, and embarked on downtown revitalization. My collaborative approach to leadership helped other community groups flourish as I sought to lift up the voices of others. The Vision 2020 Committee spearheaded downtown improvement projects, the Friends of Somersworth saved the Hilltop School from demolition, and we built relationships with Indonesian leaders who would go on to spearhead today’s Little Indonesia. In serving as mayor, I received more than I had imagined; and for this I am forever grateful.

“It has been just over ten years since my term as Mayor, and Somersworth is at a crossroads. There have been successes over the years including the development of Little Indonesia and earning the inclusive name of the “Rainbow City.” However, many of these successes have come in spite of a local government that is lost in a different era. I can say that because I’m of that generation, and it’s time we pass the baton to the next generation of leaders, activists and community builders.

“My wife and I have known Crystal Paradis for many years and watched her commit herself to service across this state. She has brought a much-needed fresh perspective and can-do attitude to the Somersworth City Council. Crystal has also consistently shown up for communities that needed a voice: spearheading a community-wide conversation on the opioid epidemic in the Seacoast, writing bold opinion editorials on women’s reproductive rights and organizing TEDx conferences and other community events to bring people together around ideas and values that might just change the world.

“We are still property taxpayers in the city and our son owns a flourishing business there. What Somersworth, its residents, business owners and teachers need is an ally and an advocate, with an open door and a listening ear. Hilltoppers deserve someone who works to find solutions in a collaborative respectful way, with openness and transparency.

“Somersworth residents have already demonstrated their trust in Crystal at the ballot box. In her first election, she garnered more votes than anyone else on the Council. That’s an indication of how hard she works for her community. She’s been resolved in fighting for affordable housing and de-burdening taxpayers while making sound investments that our city has neglected to do year over year. Crystal and the community champions she brings with her represent Somersworth’s future. A more vibrant Somerworth is possible, and it needs a leader like Crystal to see it through. Somersworth cannot wait. I proudly endorse Crystal Paradis in her run for Somersworth’s first woman mayor.” – Lincoln Soldati, Portsmouth, NH

About Crystal Paradis
Born in Portsmouth, longtime Seacoast resident Crystal Paradis is a communications and community engagement professional who helps mission-driven teams build more inclusive and connected communities. City Councilor At-Large for the City of Somersworth, Crystal was elected in 2019 with the highest number of votes At-Large. As City Councilor, she serves on Public Safety, Sustainability, Recreation and Economic Development committees, and Chaired the 2020 Election Review Planning Commission. She is the Director of Strategic Communications and Community Engagement for the New Hampshire Women’s Foundation, where she also leads the foundation’s Women Run! Program, recruiting and training women to run for state and local office. For more information, visit ParadisForMayor.com 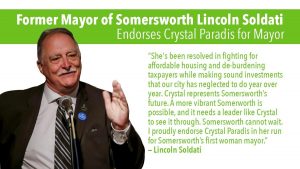 Unfortunately, they weren’t elected, but we are excited to keep working with them toward achieving their visions for a better Somersworth and Rochester @ParadisForMayor @PalanaForMayor 💛

We also want to acknowledge the significance of the two mayoral candidates we endorsed, @ParadisForMayor & @PalanaForMayor. Both have long been leaders in their own right, helping people feel seen & continuously pushing the envelope in their efforts to better their communities.

We are so proud of NHWF Board Member and Rochester City Councilor @PalanaNH and NHWF Comms Dir. and Somersworth City Councilor @crystalparadis for their hard fought races for mayor.

Thank you for blazing a trail for Granite State women running for office. #WomenRunNH